MicroShade is a Danish cleantech company founded in 2003 as a spin-off from the Danish Technological Institute. At MicroShade we first developed a solar shading solution where a passive steel membrane was used. The new MicroShade®, however, consists of a micro-structure film which, when placed in between a 2- or 3-layer glazing unit, provides optimal solar shading while  maintaining the view to the outside and ensuring pleasant daylight conditions. In combination, these parameters raise the quality of the indoor climate significantly compared to any other solar shading solution.

At MicroShade we strive to ensure better work environments, and at the same time reduce operating costs for building owners and their tenants. 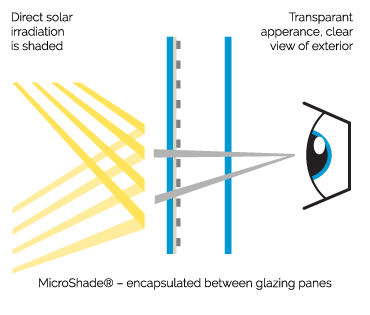 How does it work?

MicroShade® is a passive and highly effective shading solution fully integrated into either a double or triple pane insulating glazing unit.

MicroShade® consists of micro-structure film which shades the direct sun progressively. The shading effect of can be compared to that of exterior blinds - except the film is almost invisible to the human eye - so the view is maintained.

During summer, when the sun is high in the sky, MicroShade® provides beam shading of up to 100% and as such removes the energy from the sunlight. In contrast, MicroShade allows roughly 35% of solar transmittance in the winter which reduces the need for heating during the cold period.

MicroShade® allows a high level of natural daylight to enter the building and is available in various configurations suitable for both facade and roof applications.

How is it made?

MicroShade® is a micro-structure film so thin that it is almost invisible when placed between two or more layers of glazing. The only thing noticeable - if looking very closely -  is a thin slip line where the 1,5m wide film is joined together. 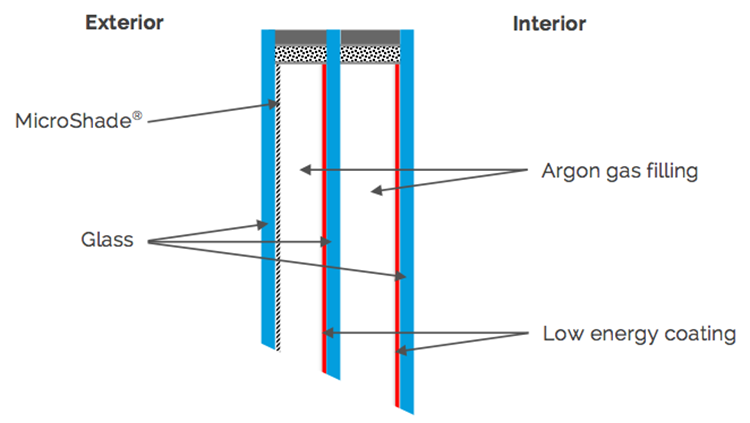 The shading of solar energy and the optical properties of a glazing are critical to anyone working near the façade. A successful façade must deliver a delicate and complex balance - protecting the building against overheating in the summer, while allowing enough daylight to enter the building and providing a view to the outside. 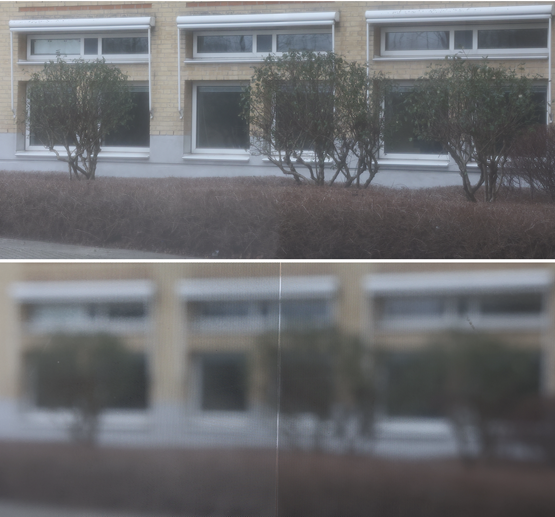 View out (on a cloudy winter day) and close-up of the film. Same window, same view.

The MicroShade® solution provides a positive impact on all primary elements relevant for a best-in-class tenant experience and overall financial return of a real estate portfolio:

The MicroShade® solution has a positive impact on all important risk elements concerning a successful building project: 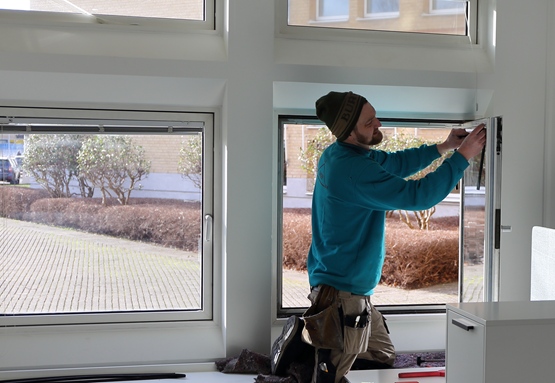 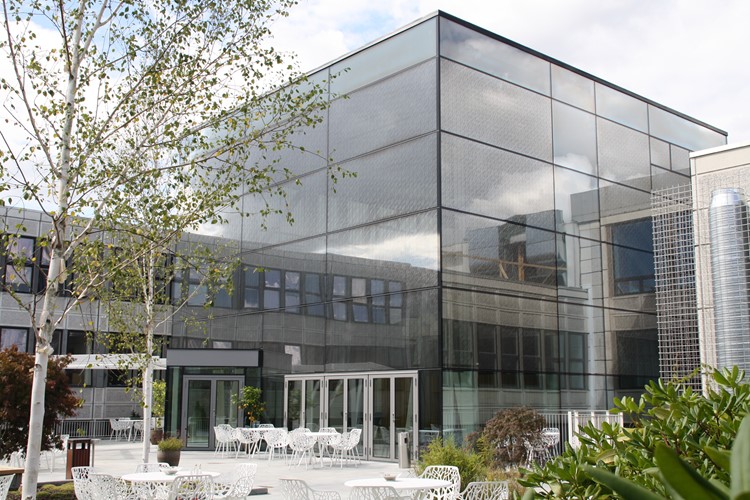 MicroShade® is the defining benchmark for solar shading in the industry. No other solution is able to deliver the same combination of low g-value (energy efficiency), quality of light, view-out capability, installation simplicity, lifetime cost and CO2 impact. To sum it up MicroShade® delivers:

Please reach out to our specialists to obtain a comparative price calculation for your specific requirements or project - or go to this link to learn why MicroShade is able to guarantee its performance. 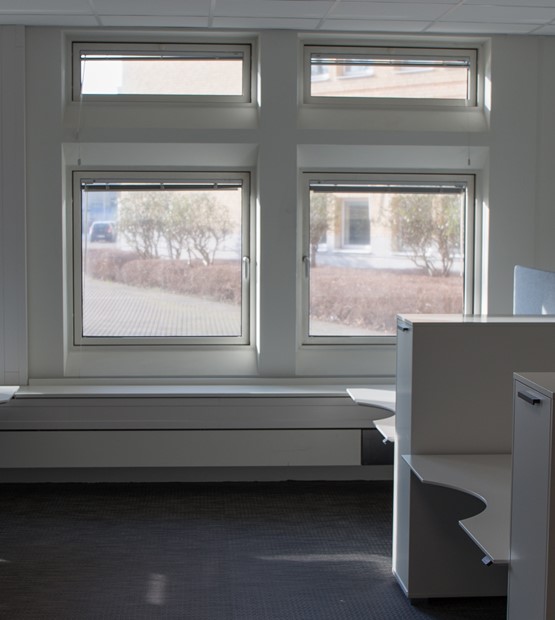 MicroShade Film® in the first location where it was installed

The story of MicroShade starts in 2003, when the company was founded as a spin-off from the Danish Technological Institute following an idea to integrate solar cells in glass facades. The solar cells are designed to promote energy-neutral air conditioning, whereby the power generated by the solar cells is used to remove surplus heat caused by high levels of solar irradiation, a well-known problem in modern glass buildings.

In 2004, the idea was further developed to also include a groundbreaking passive solar shading system built into insulating glazing. The design is intelligent, meaning that the solar shading adapts to the height of the sun in the sky. Since then, the idea has been further developed and fine-tuned in close cooperation with a number of knowledge centres and architects.

In 2009, Vækstfonden and the Danish Technological Institute made a substantial investment in MicroShade to support production and promote sales of the MicroShade® solar shading solution.

In 2009, MicroShade® was introduced to the market and installed in a number of reference installations in offices and institutions.

MicroShade A/S is a technology and knowledge-based company working in partnership with a number of knowledge centres, including the Danish Technological Institute. The company was founded in 2003 and is owned by Vækstfonden - a Danish state investment company, two Dutch funds: SET Ventures and Lucros-Capital and as well as a group of Danish business angels.

At MicroShade we take a keen interest in what goes on in the world of solar shading and keep track of the most relevant news - and we do also have an opinion about it.

We share both in our newsletters which are distributed 3-4 times per year.

We have no current vacancies.

At MicroShade we take a keen interest in protecting your data. Find out more by reading our Privacy Policy.

Introduction to MicroShade How does it work? How is it made? User experience Owner experience Contractor Experience Architectural Experience Competitive Comparison & Pricing Who are we? Mission Management Newsletter Jobs Contact Terms & Conditions Privacy Policy