This section is intended for building professionals and is where we provide you with access to our new online simulation tool SimShade, an overview of which partners can supply you with MicroShade solutions as well as relevant material such as data sheets, tender material, calculation and selection guidelines (see 'Downloads' below).

If you have any questions or you need further information, please contact MicroShade by mail info@microshade.com or phone +45 72 14 48 48.

With our new online simulation tool SimShade® you can perform guiding calculations of solar shading and glazing solutions with ease - and compare them on technical values as well as economic impact. 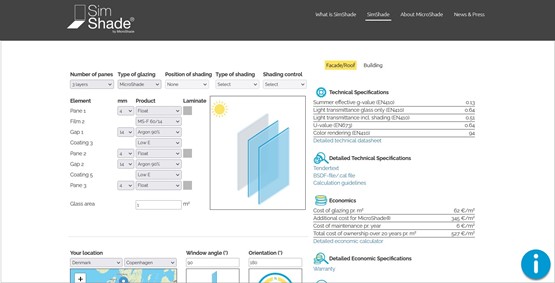 Even though MicroShade® is integrated into the glazing it should not be considered a glass product, but rather a solar shading product, as it is angle dependent, meaning that the performance varies with the position of the sun.

Due to the angular dependency, it is not representative to describe the performance with g0-value and LT0 (perpendicular to the glazing), as it is otherwise common for glass products. Instead it is necessary to use the effective g-value for thermal performance and spatial daylight autonomy (sDA) for daylight performance.

If you want to know more about the angle dependent performance of MicroShade® and other glass and solar shading products you can read more here.

We work towards making it easier and more accessible to perform building simulations with MicroShade.

Below you will find the simulation programs in which you can simulate MicroShade®. In some programs like IDA ICE MicroShade® is a standard element and in other programs MicroShade® can be simulated by using BSDF files, .cal and .rad files or angle depended transmittance data from the datasheets.

In case you need BSDF, .cal and .rad files they can be downloaded from the guideline “Daylight Calculations with MicroShade®” in our Downloads section.

We welcome your input if you are using applications in which you would like MicroShade to be implemented as a standard element. Please feel free to contact us at support(at)microshade.com

DGNB, LEED and BREEAM are the three leading voluntary certification schemes, when it comes to sustainability assessment of buildings.

DGNB is the most recent certification scheme and is called a second-generation system. It was launched in Germany in 2008 and is very comprehensive in its analysis of buildings and considers all aspects of sustainability. Several countries have adapted the DGNB to local conditions and have their own versions, but also the international DGNB version can be used.

LEED is the American sustainable building certification scheme from 1998 and is implemented in more than 135 countries today.

BREEAM is the British sustainability certification scheme for buildings from 1990 and is used in more than 75 countries. Some countries like Germany and Norway have adapted BREEAM to local conditions and have their own versions.

In the figure to the right it is illustrated which criteria in the three schemes that are affected positively by the performance of MicroShade®. 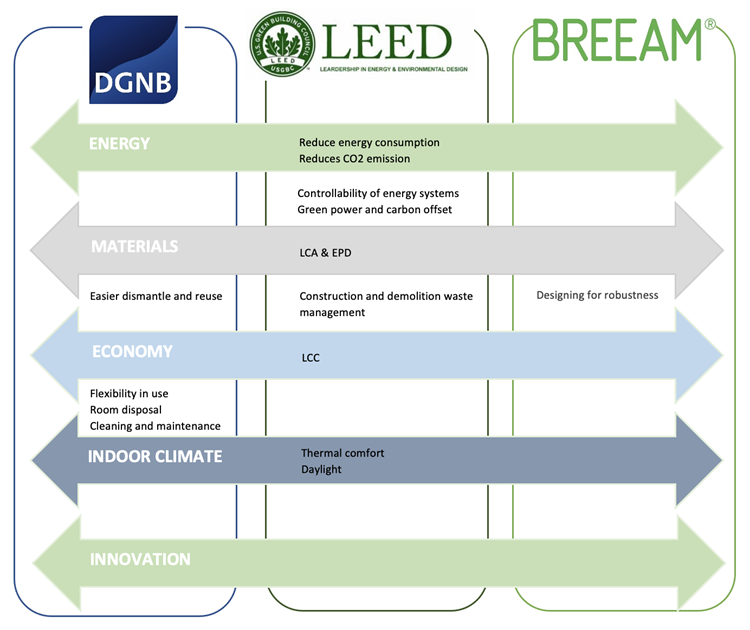 Our Strategic Fulfillment Partners consist of those companies who produce MicroShade solutions.

For 30 years, Glaseksperten has been involved in creating and developing the glass industry. Every day the gained experience is applied to fight stagnation and habitual thinking because Glaseksperten believes that projects become a success when to think ahead.

Glaseksperten helps Danish crafts and buildings to break the boundaries for the use of sustainable glass solutions. Without breaking budgets. Solid foundations are provided for even the most high-flying ideas and ambitions, so that all solution provids value in practice when the bold ideas meet the demands of everyday life.

ARNOLD GLAS is one of Germany‘s biggest and most innovative glass producers and a full-line supplier for architectural and decorative glass.

Our Strategic Project Partners consist of those companies who install MicroShade solutions.

Special solutions are the firms core competencies, and Glarmestre Snoer og Sønner are acknowledged for providing in-depth and professional consultancy along with creativity and flexibility in projects.

HS Hansen is the leading manufacturer of facades in Denmark and also has representation in all of Scandinavia, Germany, UK and Poland. MicroShade has chosen this co-operation because HS Hansen continuesly pushes the limit for the technical possibilities. A philosophy that together with engineering diligence are very compatible with MicroShade.

The co-operation has for among other projects led to making the facades for the Danish Experimentarium.

Velfac is the leading manufacturer of facade windows in Denmark. They are represented in Scandinavia, UK and Ireland. Velfac is a part of VKR Holding A/S that also owns Velux and Rationel.

Velfac sees a great potential in the passive solar shading that MicroShade can provide for their windows, because external solar shading in general blocks the view and the visual expression of Velfac’s slim profile series.

GLASSBYGG as was founded in 2007 and has been one of the largest suppliers of glass and aluminum structures in central Norway since its inception.
The company delivers and assembles both small and large projects for contractors as well as directly for building owners and for private individuals.

GLASSBYG as supplies and installs everything from large glass facades, new buildings, special constructions to mirrors and screen walls.

Since its beginning MagnorVinduet has aimed to produce innovative window and door solutions with a focus on reduced maintenance and durability (60 years).

The products are developed in and manufactured in Eidskog municipality and the administration and sales departments are located in Bergen.

NorDan is among Europe's leading manufacturers of windows, doors and smart accessories. Since the founding in 1926 NorDan has been a family owned company, and is run by the same basic values as when founded.

The group's head office is in Moi in Norway, the same place the company was founded over 90 years ago. Today NorDan consists of 10 factories, 25 project management offices, more than 1800 employees.

Approved companies who have experience working with MicroShade® - ranging from one to several projects.

Norconsult is a multidisciplinary engineering and design consultancy, providing services to clients in the public and private sectors worldwide.

Norconsult covers all phases of a project cycle from the earliest pre-investment and feasibility studies, through planning and design, tendering and construction supervision, to project implementation, operations and maintenance.

We offer highly experienced consulting in choosing the right sunscreen solution for your building. We work constantly with a wide range of different products, MicroShade being one of them. We can help you with your project right from the idea phase to the detailed execution of the project.

Warranty on MicroShade glazing is issued by the glazing manufacturer and follow normal market standards.