When German inventor Rolf Groth in 1971 filed the “heat-reflecting window pane” patent, he probably was not aware that this technology would become the leading solution in high-performance glass for the next 40 years. If someone could have told this from looking in their crystal ball and secured all possible patent variations, you would probably have been able to find them comfortably positioned among the absolute top of Fortune 500 companies today. Knowing that history has a tendency to repeat itself – we should always be on the look-out for technologies that hold the promise of disrupting the glazing industry.

Today, the global architectural glass industry is presented with the paradox of seeing a growing demand for advanced glazing, while at the same time being painfully aware that it is impossible with the current neutral spectrally selective coating technology to truly gain an edge in terms of differentiation - nor can the platform deliver on the rising demands with regards to energy consumption, indoor climate and overall well-being of the people inhabiting the buildings. The result is the rise of a new shading solution industry, that since the mid 1990’ties has grown to be substantially larger than the façade glazing industry for commercial buildings in Europe with mature regions following globally. This industry focuses mainly on exterior façade shading solutions which block the sun or selectively modify the incidence angle of light to achieve an energy performance well beyond that of neutral selective coatings on glass.

Examples of such façade shading solutions are many and include dynamic venetian blinds, fixed external lamellas and dynamic screens which are integrated as a part of the architecture. All these systems are thermally effective and offer an improved indoor climate as they provide an effective shading of the direct solar beam while to varying extent allowing diffuse light to enter the building. Shading systems using optically opaque lamellas can be characterised as classic examples of Angle Chromatic Solutions - or ACS. The basic principle of the ACS is to shade more solar irradiation from high than low incidence angles and herewith protect against the burning sun standing high in the sky.

Unfortunately, the benefit in energy saving and indoor climate of the classical ACS comes with a negative consequence in terms of reduced view out of the façade – not to mention the complexity and cost added to installation and maintenance as well as the high lifetime cost. Furthermore, they are unpredictable as their performance is dependent on configuration, wind and weather as well as manual overrides from tenants.

It seems as if the construction and real-estate industry is ready for yet another quantum leap, like the one we saw with the introduction of coatings in the 1970’ies. Ideally, it should be a solution, which combined all the positive characteristics of the coating as well as the ones from the ACSs – but without the drawbacks.

Enter the Micro ACS. This new platform for high-performance glazing products introduces new ways of manipulating the solar irradiation falling on glazed facades and roofs. In many ways Micro ACS works in similar ways to classic ACS, except the use of microscopic lamellas and other optical structures bring benefits to the solution that has not been seen before. Firstly, the microscopic structures can be made invisible to the human eye while maintaining the same shading effect as classical exterior ACS. This means that the shading element can be made invisible and that the users will have permanent view to the exterior through the Micro ACS. Secondly, microscopic structures easily fit inside the glazing cavity and can be protected by the glass resulting in long service life of the Micro ACS.

The range of MicroShade® products is an example of a micro ACS. In addition to the above qualities, glazing with MicroShade® delivers effective g-values as low as any exterior shading solution and due to the passive nature of the product the effect is fully predictable and requires no cabling and configuration. 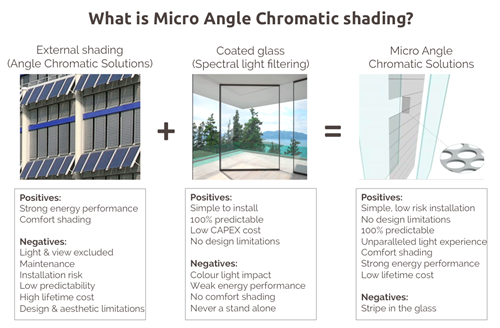 In effect, glazing with MicroShade® the Micro ACS manages to combine the best of the performance attributes from classical ACS with those of spectrally selected coatings on glass – it is not only efficient, but also simple, durable and predictable. As such, MicroShade® represents an example of a Micro ACS that constitutes a complete technological disruption, as the performance levels by far supersede the requirements of any façade demand in buildings today and expectedly the next couple of decades.

Energy and light performance are not the only parameters on which the Micro ACS eclipses the performance attributes of other solutions. In fact, Micro ACS is a technology platform which can be adapted to address specific challenges in a given location and building as well as it can service the demands of the complete façade addressing glare protection, light redirection, beam shading effects - all while maintaining view to the outside. In future versions it could also be possible to add photovoltaic features into the MicroShade® and thereby enable active harvesting of solar energy from the façade.

Such flexibility is of course primarily attractive to the users of buildings, but the technology is also well-suited to the requirements of building owners and contractors as the Micro ACS glazing is not only able to meet the regulatory demands for modern and future buildings, it is as simple to install as normal glazing and requires no mechanical configuration. Finally, it is a dream come true for the architect, as Micro ACS offers artistic freedom with fewer compromises on light and façade aesthetics, it enables a complete elimination of external shading systems and keeps the façade ‘clean’. Also, Micro ACS is compliant with shaped and even curved glazing - and sizes up to jumbo is a possibility if that is the architect’s vision for a building.

So, it would seem that evolution has brought about a new era in façade design where classical Angle Chromatic Solutions are currently dominating - but also that this will likely be very temporary as significantly superior performance can be introduced inside the glazing with both current and future Micro ACS technologies.

7 reasons why Micro ACS will be the future in high-performance glass solutions: